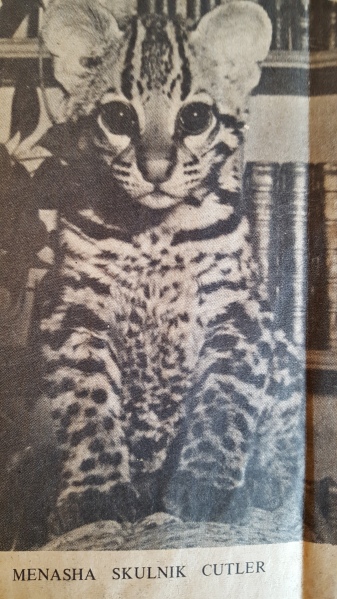 For much of my childhood and young adulthood I had an ocelot for a sibling. In fact, many of my friends remember that more than anything else about our family.  My mother, Jane Hall Cutler, was devoted to Menasha Skulnik — she named him after the famed Jewish American actor in spite of her Catholic roots. (She often named pets after people she admired.) The other day, as I sorted though papers, I found an article from The Fauquier Democrat (4/5/1973) by Jane Cutler, “If You Want to Own an Ocelot, Consult Your Nervous System.” It has Jane’s characteristic wit, and the answer to a question I still get — “Whatever happened to that ocelot your mother had?”

The article is really a eulogy:  “Last week, Casanova [Virginia] lost her oldest resident — an ocelot, Menasha Skulnik Cutler. By human standards, he was well over 100 years old. According to Dr. Lee Crandall, former director of New York’s Bronx zoo, the oldest ocelot on record died at age nine years, eight months, seven days. Skulnik was going on 20 years old. And he had all his original equipment, never had the three disarming operations that appeal to so many owners of ‘exotic’ pets. .… Ocelots are beautiful, lovable, and intelligent, but they are also noted for taking on whatever they can overpower — including veterinarians.”

Jane recalled some of Skulnik’s various “jet-pet” adventures. “He spent two summers swimming on Long Island and Cape Cod; winters he lived in a penthouse apartment. One afternoon, before his legal difficulties dictated the move from New York, while we watched, petrified, we saw a six- foot college student come headfirst out the window of his parents 18th floor apartment . . .where, handily, there was a narrow ledge. (That’s how Skulnik got in.)”  The ledge was next to our terrace and protected by a balustrade. “This nice young man appeared visibly shaken. He said he had been fast asleep recovering from exams, when, he said, he heard a sort of roaring and there was this wild animal on his bed, ‘Just staring at me! Can you imagine, in a New York apartment?’ Oh yes, we said. We could.” I remember that incident well though I wasn’t sure, until I saw this article, why Skulnik had to leave Manhattan.

1100 Park Avenue was, I assume, full of well-mannered residents who were not about to put up with a wild animal for a neighbor.  But it didn’t help that a rumor mill distorted the facts a bit. That’s because my parents had a visit from “Cesare,” “a magnificent cheetah made famous by the Disney film, “African Lion.”My mother recalled that as soon as this extraordinary creature came in the front door from the elevator hall, “he lit on our zebra foyer rug and tore it all to pieces. “‘I guess he must be tired,’” she told the handler politely. Soon letters began to arrive on legal letterheads implying that the wildcat in apartment 18A was actually verrrry large. And so, in 1959, Skulnik was forced to retire to Poplar Springs, his Casanova farm.

But how in the world did Skulnik live so long? “Well,” Jane explains, “in addition to Dr. Atkins’ diet, which he discovered in the spring of 1954, we attribute Skulnik’s longevity to green peppers, the occasional aperitif, and TV.… He had two sets — gifts from admirers: one was black and white, one color portable.” While I remember “I Love Lucy” being one of his favorite programs, apparently Skully also loved westerns, auto races and sports. “Soap operas put him quietly to sleep, newscasters sent him underground,” Jane observed. Nor did I realize how much he loved football games. “Each weekend he would watch unblinkingly for hours.” And then, Jane noted wistfully, that Skulnik’s health began to go to pieces after the Dolphins beat the Washington Redskins. Following a rocky winter, he died on the first night of spring 1973.

This was probably the last published article author and MGM screenwriter Jane Hall ever wrote; the topic is not surprising. Her love for her animal companions was legendary.

My most vivid recollection of Skulnik, who was a one-woman kind of guy, comes from his time in NYC. I was about nine years old. On this particular night, my parents were out and I tried to poke some raw hamburger into the chicken wire on Skulnik’s Park Avenue habitat. I wanted so much to be his friend. Unfortunately, I used the closest implement available — a pen that was on my mother’s desk. Skulnik grabbed the pen and the hamburger and took it down into his lair. I panicked and threw the top out an 18th-story window, foolishly thinking he would eat the rest of it. But he didn’t. Unfortunately, that was my grandfather Dick Wick Hall’s pen. Jane adored her father who died when she was eleven. I still have the chewed up bottom of the pen and indelible memories of my mother’s reaction to this fiasco. But that’s not a story for print.

If you want to know what happened to Jane before she met Skulnik, check out Such Mad Fun. Skulnik never made onto the cover of Cosmopolitan as my mother’s wire hair fox terrier, Kate, did. However, this golden-eyed feline is still alive in the memory of so many people. Perhaps today his spirit enjoys the jazz on the new terrace at Poplar Springs which is now an inn and spa. Few visitors know that Skulnik and Kate are both buried there near each other. I was wrong in the book–Skulnik lived with us for nineteen years, not seventeen. And that must be some kind of record.