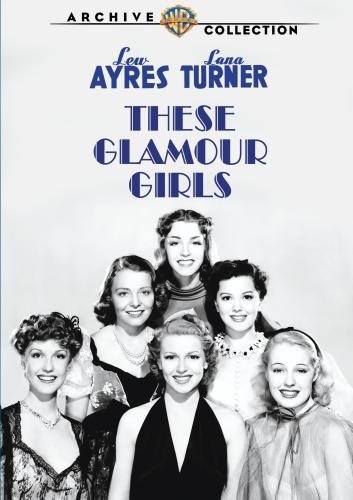 Despite the loss of its beloved host, Robert J. Osborne, two years ago this month, Turner Classic Movies is still thriving. For those of you who are classic film fans (or Such Mad Fun fans), I strongly suggest subscribing to TCM’s Now Playing Newsletter. In addition to several Irish films, Thursdays devoted to journalism in the movies, a subject dear to my heart, the March programs also include a whole day devoted to social comedies featuring debutantes. And guess what? On Monday, March 18, at 2:30, These Glamour Girls (1939), will air again. You may remember that the backstory for the screenplay of this movie, written by Jane Hall and Marion Parsonnet and based on a story by our own Jane Hall, is explored in great detail in Such Mad Fun.

TCM’s Frank Miller describes the movie, one of Lana Turner’s earliest, as follows:

There’s something light and sweetly appealing about Lana Turner in her earliest MGM films, particularly when she’s cast as a girl from the wrong side of the tracks. Before the studio swathed her in glamour, they cast her in this likable social satire as a taxi dancer invited to a big college party by drunken playboy Lew Ayres. What starts as a cruel joke, turns into true love when Ayres finds there’s more to her than most of the high society beauties he’s supposed to be dating. Since Turner wasn’t a big marquee name yet, MGM matched her with a quartet of female co-stars who all add to the film’s luster. Jane Bryan (on loan from Warner Bros.) is Ayres’s society sweetheart, ready to give up her family’s wealth for working-class student Richard Carlson. Ann Rutherford of the Andy Hardy films is a debutante who gets dumped by her date. Anita Louise is the resident mean girl out to make trouble any way she can. And Marsha Hunt, in one of her favorite roles, provides the heavy dramatics as a young woman considered over the hill at 20. Within a few years, Turner would move up to star status, leaving little time for ensemble pieces like this. But while it lasted, she helped bring a youthful buoyancy to MGM’s films that’s hard to resist.

And this comedy-drama about college life, originally set at Princeton University, grapples with many issues that resonate today. For weeks the producers at MGM struggled with the rigid requirements of Joe Breen and his Motion Picture Production Code enforcers who objected to, among other things, the many scenes of drinking in the original script. After multiple rewrites and assurances that none of the characters would be too scantily dressed or too drunk, the script finally passed muster. What few people know is why screenwriter Jane Hall’s worries about the effects of alcoholism go back to her early childhood. For more about that, you may want to check out the book.