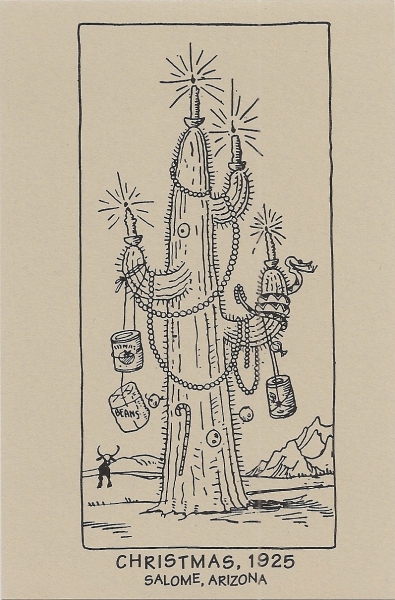 Happy Holidays to all!

This illustration of “Our Christmas Tree“ (unsigned but possibly by Claude G. Putnam)* appeared in The Salome Sun in 1925. No one imagined it would be Dick Wick Hall’s last Christmas (see prior post).  Dick added the following thoughts using  the sporadic upper case letters that became his signature and some deliberately questionable grammar:  “Christmas comes pretty near getting by here without noticing us much Much and Vice Versa and Nobody remembered it was Christmas Day until December 25, which happened to be Christmas day – even if we didn’t think of it . . .Archie Bald Doveface reminded us of it.… He also said Folks out here ought to Respect Christmas because Christ come from the desert – but Scar Face Scroggs says if he did he sure had Sense Enough to Leave it; all of which I don’t pretend to Argue About. . . . You can’t very well have a Tree out here where there ain’t nothing much but greasewood and sagebrush, so we compromised by using the Big Cactus near our Office and everybody had a Good Time excepting Happy Jack Aagaard, who volunteered to act as Santa Claus and had to climb up to Light the Candles and Get the Presents while the Reptyle Kid played A Hot Time on the Harmonica . . . The Frog got more Presents than anybody, including a Canteen of Water and a Bath Tub.”

If Dick Wick Hall were alive today you can be sure he would have fun writing posts about ways to improve life in what is now La Paz County (and used to be Yuma County), about the challenges of Golf in the Desert, the adventures of his Frog, the trouble with Easterners and promoting his latest business venture; many posts would poke fun at Society Ladies. And, as Dick was buried near this very same Saguaro, we will end the year on December 31 with a few observations about his ghost and his legacy–with some more insights from Tom Masson who thought Dick never really died. And he has a point about that.

Next month we will follow the Hall family to Los Angeles and Manhattan Beach, California where Jane kept on writing and made quite a success of it . So let’s give Dick the last word and see what he had to say about California: “Folks who have Never Been to California, or those who have Been There Once and can’t get back again, they all Dream of it – a good deal like Women who have Never Had any Pink Silk Undies, or those who Have Had Them and can’t get any more. California, in many ways, Is a good deal like Pink Silk Undies. It Takes Money to live in or Explore the Wonders and Beauties of California –and that is what a Lot of us are Working for –the Money to get either into California  or Pink Silk Undies – and Dreaming of the Good Times we will have When We Get There.”*

*From The Salome Sun. Putnam was the illustrator for the syndicated version of the Sun and for some of Dick’s stories.

PLEASE USE THE CONTACT TAB AT THE TOP OF THE PAGE FOR ANY QUESTIONS OR COMMENTS.