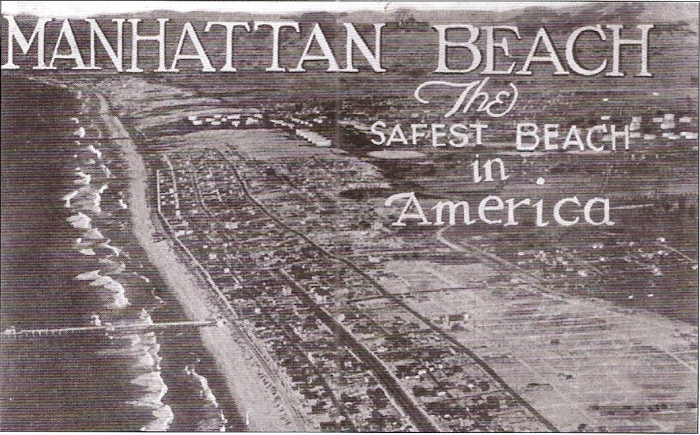 When Daysie Hall and her children reached Manhattan Beach in 1927, the area had just begun to come into its own as a popular resort. Much of the shoreline with its massive coastal sand dunes was still undeveloped and flyers eagerly promoted “the safest beach in America.” The 928 foot long pier had been a big attraction ever since its completion in 1920; a large neon sign that spelled out “Manhattan Beach”  welcomed visitors after dark. As many as 360 people at a time could rent bathing suits and change in the large bathhouse available on the land end of the pier. Out on the ocean end they bought tackle and fished or enjoyed the restaurant in the lighted stucco octagonal pavilion. When the weather cooperated, men, women and children in modest bathing wear or fully dressed set up tents or umbrellas and shared picnics on the sand. And there were still rules of decorum. A sign proclaimed that no bathers were allowed on the streets without a robe.*

It must have been hard for tourists to imagine how recently there had been no roads, few boardwalks, and no electricity in the area. Mules still had to clear sand and level out the beachfront. But Daysie was not a newcomer. The Sutton Family had lived in Los Angeles between 1890 and 1897 while her father, James Sutton, was General Manager of the 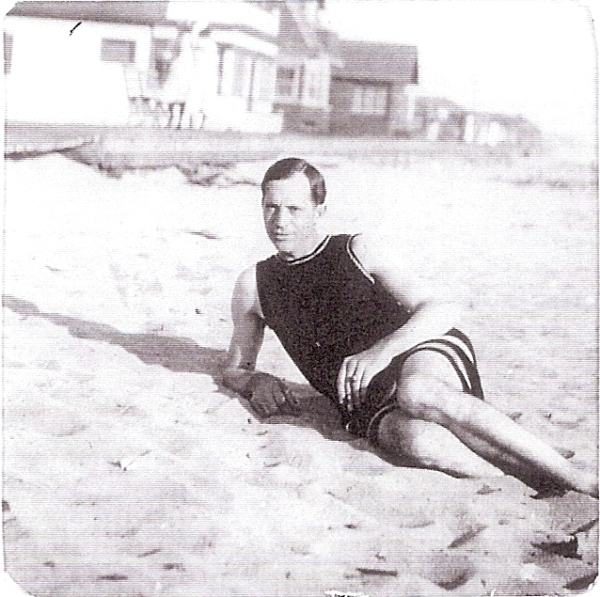 Redondo Beach Road. She and her family would come to the area on weekends. Daysie had fond memories of the days when there was much less activity along the South Bay. And once she married Dick Wick Hall California’s beaches provided her family with relief from the desert heat every summer.

In 1927 Daysie’s first goal was to find an affordable home with access to good schools for Dickie and Jane. A shingled, three-bedroom rental at 1148 Manhattan Avenue on the corner of 12th Street had great appeal. With their windows open, they could hear the seagulls call out and the waves crash on the beach.

Manhattan Beach in 1929 with Hall House. MBHS and Jan Dennis.With their windows open, her family could hear the waves churning up sand. The house sat on a narrow lot at the top of an incline just a short walk from the beach and several shops including a drugstore, bank, market, a bakery and two small restaurants. And perhaps most important, a bus could take Dickie the four miles to and from Redondo Union High School. They settled in before his sophomore year began.

Jane continued on track as a frequent author and prizewinner for the Los Angeles Times young writers’ pages while she tackled the responsibilities of eighth grade. By the following summer her skill as a wordsmith had attracted local notice. In July 1928, the Manhattan Beach Progress editor, Harry Wilson, noted at the top of one of his columns: “There are few who have not heard of the late Dick Wick Hall, the writer, who made Salome, Arizona famous. . .” And with that, he introduced a polished editorial by Jane on her first impressions of Manhattan Beach.**

Proclaiming that Manhattan Grammar School was the best school she  ever attended, Jane gave the town high marks as “one of the cleanest, neatest, most ‘jazz free’ little communities on the Pacific coast.” It is filled with “real, whole- souled” American citizens who take an interest in everything around them, she wrote. Recalling her father’s skill in marketing Salome’s “Laughing Gas Station” with warmth and humor, she noticed that some shopkeepers in Manhattan Beach were a bit lackadaisical –their wares “are displayed in a rather haphazard fashion.” And, she warned, they needed to be more friendly to the tourists or they would take their business other places such as Hermosa, Redondo or Los Angeles.

Jane’s honesty, spunk and unusual talents soon made her the Manhattan Beach Correspondent for the Redondo Daily Breeze. She exuded self-confidence in the daytime and yet, when the seagulls were silent and the streets fairly deserted, when only the moon and stars could be seen outside her window, she had trouble sleeping alone in her room. As soon as the house was quiet, Jane confessed in a diary that she kept for a few months in 1928, “I go scuffling in to mother.” She was mad at herself for being so “babyish” at thirteen even though both her mother and her beloved gram, Rosa Sutton, could certainly relate to her curiosity and uneasiness about ghosts.

Manhattan Beach is now one of the most beautiful and expensive places to live in the United States. Home values often far exceed $1,000,000. And many residents value the community’s rich heritage as much or more than its real estate. Through its meetings, lectures, publications and its museum in the cottage at Polliwog Park, volunteers at the Manhattan Beach Historical Society keep this history alive.

View of the ocean from near 1148 Manhattan Avenue today

1148 Manhattan Avenue was Talia’s for 36 years. It is now the very popular Fishing with Dynamite Seafood Restaurant. Some of the old structure of the home where Jane lived still remains folded into the building.

*Both images of Manhattan Beach in the 1920s are at the Manhattan Beach Historical Society. They were also published in Jan Dennis, Manhattan Beach California (Images of America Series). San Francisco, CA: Arcadia Publishing, 2001. Many thanks to Steve Meisenholder, former President of the MBHS, for his help with several details as well as information about the original house the Halls rented at 1148 Manhattan Avenue.

**Above the clipping in Jane’s scrapbook, she wrote the date July 11.

PLEASE USE THE CONTACT TAB AT THE TOP OF THE PAGE FOR ANY QUESTIONS OR COMMENTS.